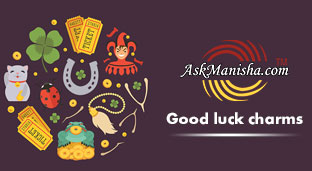 Everyone wants to lead a happy and contented life without any sadness and sufferings in life. No one wishes to be surrounded by pain, sorrow and misery all the time. Hence it is a common practice to enquire from the people around us as to what things can result in a good or a bad fortune. Good luck charms are meant for bringing in good fortune, good time and prosperity to an individual. Good luck charms take off negative energy from one's life by acting as a protective force against all the bad influences that pose as a serious deterrent to one's success in life. The use of good luck charms also depends upon a person’s self belief.

Following are some of the good luck charms that help you in attracting good fortune towards you.

The Wishbone: The hen and the rooster were popular in ancient times. The hen crackled when she laid an egg and the cock crowed at the beginning of the day. This was the time when the fowls had special powers and could also answer human questions. After the hen oracle was performed, the fowl was sacrificed to a special god. Its collarbone was saved and hung in the sun to dry. The name was then given to it and hence named wishbone. There are two ends of this wishbone and then the person holding the longer end was believed to grant you the wish.